Things are frenetically churning along, but I still can’t resist adding devices that don’t take much development time and have a large payoff.

So, as a quick aside from some other work going on:

I present a terrain textured with a mask from the new Convex Selector. 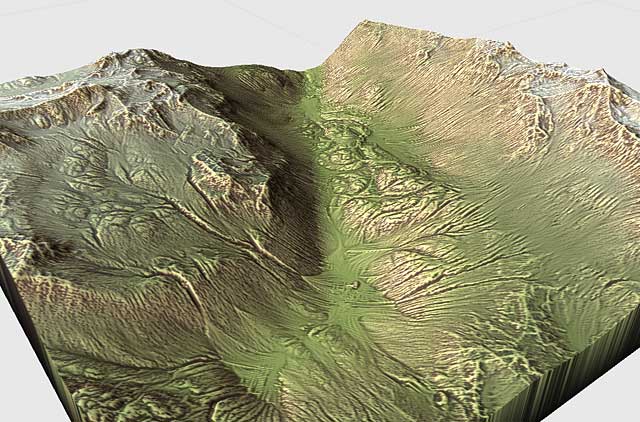 The device does exactly what it’s name would imply — shows areas of convexity and concavity (Essentially, this is calculating the Laplacian of the heightfield for you math geeks) .

For texturing purposes, it’s not as obviously useful as height and slope selections, but a bit of experimentation will show alot of the power of this device. One purpose is like the above : Used to really “pop” the detail of the terrain (darkens cracks, lighten exposed areas). If any readers have ever painted any fine-scale models you probably used an india-ink wash for the same purpose.

This is also pretty much the same thing as the Local heights macro, except of course much faster. You can achieve varying levels of effect by blurring the input to the filter before applying, such as done here to get a softer effect: 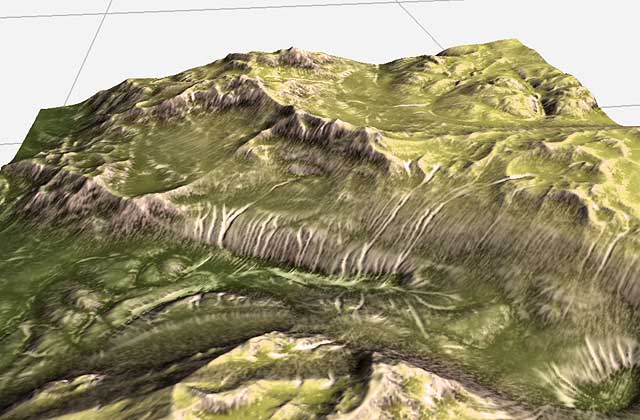 Enough sidetracking for now. Back to work!

8 replies on “Sidetracked for Good Results”

might be very interesting to combine that device with the slope selector.. That concavity selection is slope independent, right? (if we exclude the problem of the heightfield grid-based representation) What I mean to ask is if a given “bump” on an horizontal surface produced the same mask as the “same bump” on a 70Âº angled slope?..

Inspired texturing! 🙂
You hit the nail on the head about artistic techniques: basically stuff to accentuate or control the perception of form. For instance many artists will begin each pencil stroke with increased pressure, tailing it off very quickly to give a sense of connectivity and weight to points of intersection, or of course darkening edges, etc.
I’ve spent some time today re-creating some textures of hills and I could well have used the new device! 🙂

You have some very inspiring stuff here. I’ve been enjoying this dev thread, and fascinated with the development of v2. World Machine is THE place to create terrains imho, for its incredible devices and natural mimickry. Jolly good show!!

One of the things I most like in this app is that the images that produces are not a mimicking of reality but, rather, a comment on it. And this happens in a so delicately suggestive way that awakens an ecstatic, somehow, feel when looking on them. Something that I suppose is not intended. But the very fact that they happen unintendedly is interrelated deeply with the mentioned ecstatic element :).

This is very similar to a process we use called Ambient Occlusion, which is sorta like lighting a 3D object with a sphere of dim lights and then baking that information into the object’s texture. The nose popes out, the eyes recede:

No matter what lighting the object eventually gets, the Ambient Occlusion map will make the object look very real in Real Time. This is a really neat addition.

Hi Craig, it does produce some vaguely similar results as Ambient Occlusion; however, since it doesn’t cast rays it doesn’t detect actual occlusion.

However, one of the remaining features that I think is indeed going to make it into the Lightmap generator is an ambient occlusion generator to produce more realistic lightmaps.

“…into the Lightmap generator is an ambient occlusion generator to produce more realistic lightmaps. ”

How about some .HDR preset lighting maps for terrains/previews in a skydome-style environment? For those who would bake the terrains (+illumination) for use in a realtime app, this would be very handy, equally handy for concept/effects artists who are trying to establish a mood.

Actually, this could be used to good realistic effect. Sediment will tend to deposit in concavities and wind will tend to clean and abrade convexities giving them different colors. This is much the way that vegetation and sand distribution can be affected by slope. Also, if this could be applied to heightfields or masks, you could use this to flatten out the bottoms of concavities and convexities and possibly to give more of a streaky and abraded or bare rock texture to convexities. I may have to get one of those evil Windows machines just for your app.
🙂