It’s been a little while since I posted an image from WM Pro, so here’s another output result from a test file a bit ago: 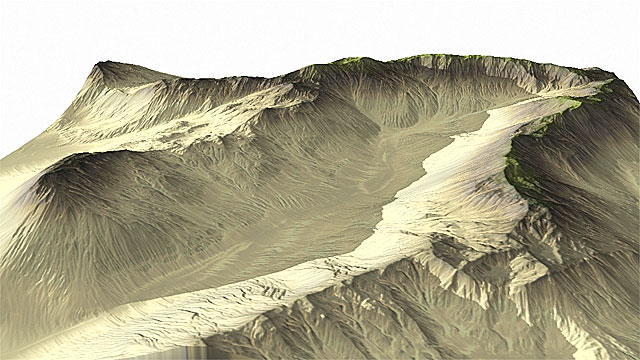 The mountains were defined by layout shapes guiding a perlin generator, routed through regular+thermal erosion for the geometry modelling. The texturing was done quickly by dropping in one of a couple coverage macros I created. 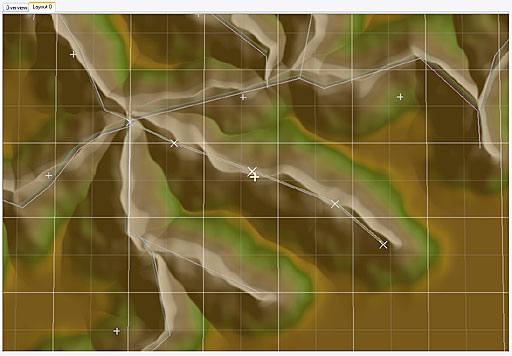 I’ve cropped out most of the UI as it’s still not in finalized form, but you get the idea… Next, here’s the device graph to produce the first image: 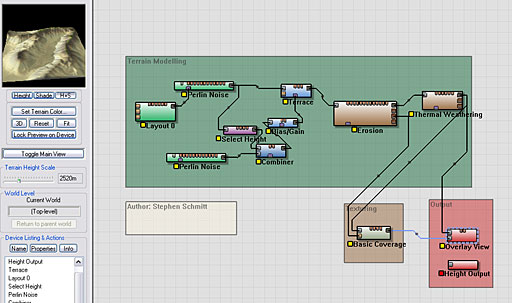 Also note that the coverage/texturing ability can be abstracted via macros to complete simplicity. To go from the typical WM 1.0 height-color-mapped output to a nice output texture required only dropping in a “Basic Coverage” texturing macro and then picking some colors in the properties window for the macro. Dead simple. To export the texture map in addition to the heightfield, one would simply add a “Bitmap output” device, and connect the output to that.

This really looks awesome! I think this gives a great amount of control to the user.

Very impressive indeed. Can’t wait for the beta to try ‘er out.

I’m still wondering if your going to have a tool of some sort to sculpt roads into the terrain. Is this something you’ve thought about? I know we could use this ability. It would be huge for us.

The ease of mountain/valley creation in Layout looks like a crowd pleaser! I am looking forward to these new features.

Keep up the good work!

Definately looking very exciting to use, the terrains keep getting beter and better. SeerBlue

wow! truly impressive. the layout shape tool opens up a multitude of terrain possibilities and the ease and control that comes with it. i love the texturing stuff as well. cant wait for the beta.

keep up the excellent work!
– Rom

being able to define roads with this method would be very powerful and practical (for the user). being able to make the guides have a hight off the surface would pull the terrain up into the air to make a road surface, with a bank. just an idea…

in the history of the human mind and why not? noiseless events
imdb gerard butler*
face to face the rising moon beholds the setting sun dot As yet the