Things are really picking up steam and the pace of development in the last month has been frenetic in preparation for the upcoming release of WM 2.

One commenter on the last post noted that it would be helpful to make more mention of WM2 on the website to let people know about. Don’t worry about that! This blog is here mostly to provide people a look at the development process, get sneak peeks at upcoming features, etc. When we’re approximately one month out from release, there is going to be a much more public exposure of WM2! The entire website will be redone, including very detailed information on what all WM2 can do, etc.
Anyways, on to some development news.

In terms of features exclusively for WM 2 Pro, there’s been some tremendous developments lately on widely different fronts. For one thing, I’ve successfully ported the WM2 codebase to the 64bit x64 platform. This means that developers working on 64bit machines will no longer have to worry about RAM and address space issues! There’s a few compatibility issues I’m still working through but I expect no problems having this available for initial release.

In addition, I’ve implemented device-level multithreading for the most time-consuming devices (this includes Erosion, Layout Generator, and Lightmap Generator). The speedup is quite noticeable, and as the world shifts to quad-level and higher machines, this will be more and more impactful. Device-level multithreading is most useful for large single-tile (normal) builds, and for previews of long/complicated networks. Of course, terrain generation in the layout/explorer views and tiled terrain building have of course been parallelized for a while now, and scale very nearly linearly with the number of CPUs available.

I’ve been giving some thought to how I want to differentiate the Professional vs Standard editions. My thoughts on that matter is that I don’t want to limit the Standard Edition in actual artistic-features per se, but rather simply reserve all of the powers that are most useful to a production environment for the Pro Edition. This means that Tiling (Input and Output), XML scripting, 64bit and massive multithreading are among the features that will be reserved for the Professional Edition.
I think this gives a compelling featureset to the Professional edition while not limiting the creative power of the Standard Edition in any way. In addition, I think I’m going to open up the previously Standard-only features from WM 1.x to the Basic edition as well. New devices may or may not appear to take their place as Standard-only features.

Some of the best changes however in usability are however falling into place at the 10th hour right now. I’m not prepared yet to reveal what’s in store for Beta-6, but it will more or less bring Layout Mode to the level of operation I’ve always envisioned. It’s a race against time to finish the features I’ve set out to bring to market for WM 2, but so far the results are encouraging!

And just to make sure there’s a nice picture in this post, here’s something showing off the improved terrain model of Layout View now. I think the vastly increased seamless zoom level is, far from being just “cool”, integral to being able to work efficiently in Layout Mode. 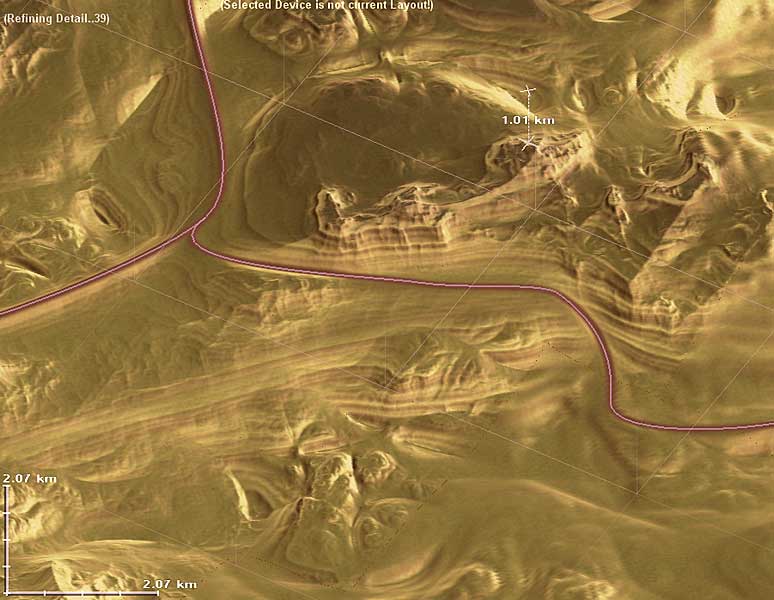 3 replies on “Closer and closer…”

Way cool, i can’t wait to see and play with it.

Great update. I really appreciate your thought into the pro vs standard feature set. I enjoy the fact that I wont be missing out on any creation tools with the standard edition! Furthermore thanks for the input about the new website and all. Very cool. And the picture is awesome! It seems like this layout mode will create an even more visual creation process to WM. I have always loved the device layout of WM1, and it seems like Layout will make WM2 just as unique as WM1 was.

Oooooo!.. A scale! and one that looks like it shortens and expands with camera angle! I also spot something new and long wanted 🙂