Much of the work over the last week has been focused on user interface issues. This is an area that it’s possible to make rapid and daily progress on, which is a huge plus — to be able to check off three to four tasks on the todo list every day is gratifying.
Sometimes it’s a bit distressing to realize how much time and effort is going into “trivial” things like user interface issues, usability, and polishing. When compared to implementing new/unique/exciting features, it’s much less satisfying. However, I’m convinced it’s one of the more important jobs — it’s astounding what a difference in user comfort it makes.

Although I’ve been referring to most of the work being done as being done on “World Machine Pro”, that’s not quite accurate — what I”m working on is actually World Machine 2. But since there’s 3 trim levels (Basic/Standard/Professional), when the Pro level is complete, all of them are — Basic and Standard are achieved by limiting in some fashion all of the abilities of the Pro edition. The current candidates for Professional-only features are the Tiling system, Multithreading,Â  Automation Scripting, and possibly a few other things.

Since these blog posts always seem to need a picture, here’s an example of the improved 3D View “render” button. It’s been a longstanding complaint that you can’t see greater than 1024×1024 resolution in the 3D View, making it hard to see what high-resolution builds actually look like. You can now press a render button in the 3D view and have it draw the current scene in full detail. It still uses OpenGL, and is identical in color/lighting/etc except it is focused on a static render rather than interactivity, allowing the use of the arbitrarily large terrain. As soon as you move the camera the view will revert to the previous resolution. 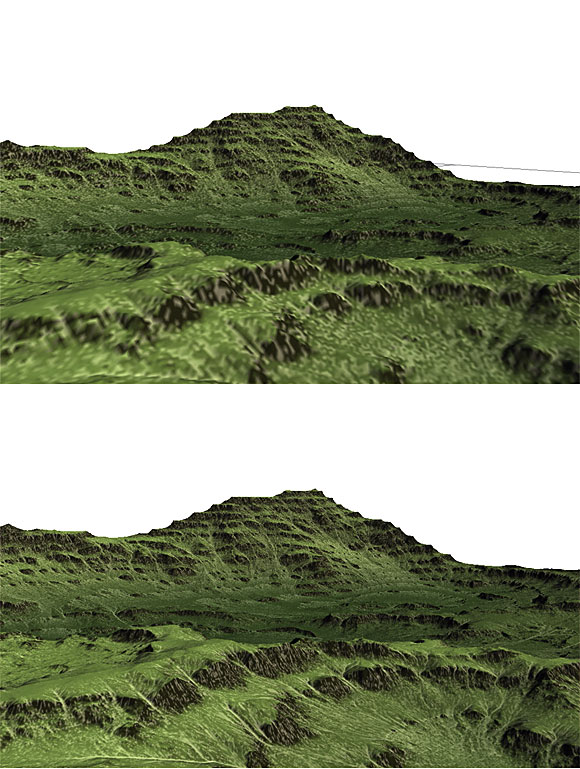 Very nice, no very, very nice. Even in these small pics the increase in detail is outstanding. SeerBlue