Sorry for the lack of updates recently, they have reflected a bit of a hectic period that has limited WM development time. Things are easing up at the moment, however, and getting back on track.

Anyways, as promised a while ago, here’s a first screenshot of part of the Layout Mode UI: 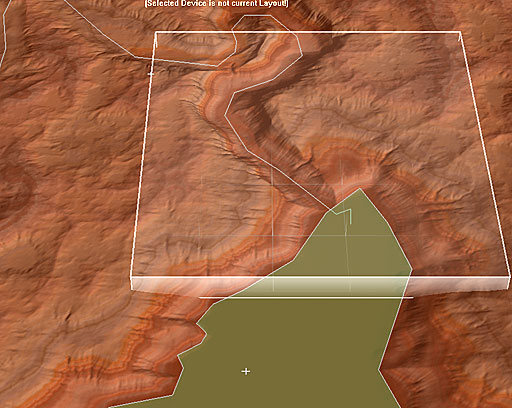 A bit of an explanation:

Layout mode lets you “lay out” terrain features, filter mask areas, etc with vector graphics. In the shot above, WM has Layout Mode activated, and you are viewing a layout in the view. The current layout has two shapes defined; a sketchline and a polygon. Each has a falloff profile defined, and the sketchline has profile vertices setup to adjust the height of the canyon as it goes.

Other neat stuff has also been added since the last update, such as a sortable tabbed toolbar with a customizable “favorite devices” tab, Output Ports (allowing you to wire from one output to multiple inputs without using a splitter), and more. Hopefully A-3 will make it out to the test team finally relatively soon, which is starting to represent a feature-complete status for a good chunk of Pro.

Aweaome work Stephen 🙂 I especially like the profiling along two axes. The actual layout mode looks great too.
The mention of an overlay atop the terrain has got me wondering just exactly what that is- I don’t suppose it is an image overlay…?

AWESOME, I really like the working with vectors and vertices, large scale realistic terrains on the way soon.

Holy hell. I have been checking the forum each day and seen no new posts for ages. I was thinking that things were quiet on the WM front. This is exciting stuff. Great to see and I can’t wait.

I just had a thought, with this could I take a tiled, mostly completed terrain and put rivers in, I mean modify the heightfield where water course dead end because the elevation starts to rise, where in nature the water would have found some way out, so I can get long continues rivers from tile to tile, ala ME-DEM’s tiles.

You figure with the sketchline river networks could be drawn and the polygon lakes and or oceans can be made which looks like the idea in the image above. 🙂 Now with a falloff profile maybie deltas can be formed as well if i am thinking about this right?

A really useful feature would be to simply draw a vector line indicating the river over an existing terrain, then click on the river (device?) and open up the river profile- ie the profile that indicates the height along its length. Then click ‘Drape vector over terrain’. Thinking about it I’m sure this draping is obligatory, no?
You would define the lateral falloff and the river depth seperately. You could do both of those with a single 2D graph. This is how WCS creates its terraffector profiles. There are probably lots of similiarities here, except terraffectors are render time, WM’s actually affect the terrain! This is a first 🙂
The drawback to the cross sectional profile graph in WCS is that it’s difficult to vary the width and depth of the stream along its course as it would in nature: getting narrow towards its root. It’s possible but requires multiple teraffectors which is a pain. You don’t normally need info like that for renders, but for terrain you do. I suppose that’s the drawback with rivers as vectors. With bitmaps you can vary width easily. The abiltiy to be able to somehow combine the vector with a bitmap for its width would be another first. Another way, without using bitmaps would be to input a profile (an interface much like the profiles in Wilbur and Leveller’s Mound tool) which determines width along its course, etc.
Seer, one approach would be to use the vectors for the larger, more prominant rivers- where you definately wanted rivers to be, and use standard erosion for the rest. What’s great about the above shot, is that it’s actually indicating that the erosion is interacting with the vectors -or is the terrain previously generated?
Also, a really big bonus would be the import and export of vectors in industry GIS standards such as .shp. The possibities are HUGE. You could use GIS channel extraction techniques, export as vectors and import into WM. You would well on the way to having a river network.
There are good times ahead. lol

Another thought is, it would be very useful to be able to make the rivers actually determine the height of the terrain- so they would in effect be acting like splines. This is the opposite of the ‘drape vector to terrain’ idea.
The reason is, the most difficult thing to do with terrain building is to get morphologically correct watercourses BEFORE erosion. For instance, GeoControl is brilliant for drawing realistic ridge morphologies: get an image of a mountain range network from Google Earth and you can replicate them in no time at all BUT as good as GC is at this, you still cannot guarantee correct slopes for rivers between those ridges. It’s simply impossible. In fact it’s impossible in any app unless you have oodles of time and patience..
This is important because mountains very rarely have dead-end rivers: if you look at them the rivers always flow out in the end, except in special cases such as deserts where drainage is very swift. This means that the slope must always be going down or level.
A really interesting approach to this is, is to define terrains in terms of watercourses, or at least get the basic skeleton of your more major rivers. Joe Slayton (of Wilbur) is considering this and I think it will be a significant step forward. If WM could allow this as well as the drape vector to terrain, that would make things very interesting. It might make for some funky terrain, depending how you implemented it, but it would set up the terrain to be worked on in WM or elsewhere- all you would do is fill in and develop the areas between the rivers: they woukd be ridges after all. So in WM you would add your splines across those areas between the rivers- so rivers and ridges are all sound.
You would need to be able define the start and end alts of the river. You might then have a button which says ‘interpolate all heights between those linearly’, or even better, have a 2D profile defining the fall of the river- any rising slopes would be flattened.

Also, I’m thinking that the splines we’ve had glimpses of in Layout Mode could be used as contours- simply set their whole length to the same height. WM could then have contours (?) which are HUGELY useful.

Well what about GeoControls upcoming River Tool that is planning on being implemented in version 2. Any more information from Cajomi on this?

I gather a River Network Device for World Machine is just to difficult for anyone to do so it looks like that is out for now.

I am going to ask Cajomi about this in the next couple of days- I keep meaning to. He is very well placed to pull it off because he already has the L systems in place. ‘All’ you need to do is invert things- the L systems now create river channels, not ridges. I think it’s a fairly tricky process to get the two networks (ridges and channels) interlocking, but he’s probably got as good an understanding of L systems by now, as anyone.

It sounds like we might not need a network device.
I think that with the tools and code that Stephen has now got, I think the whole rivers thing could be close to being solved.

Does this meen we will be able to create roads using splines?