It’s been quite a long time since the last post here!

The latest development build (3014) of World Machine is available today, and that will be a whole topic of its own. Briefly, the two most notable and immediately useful new features are a major reworking of the River device to fully support multiple rivers and hierarchical river systems, and a usability improvement that lets you view the “before and after” of any device in the 3D View. 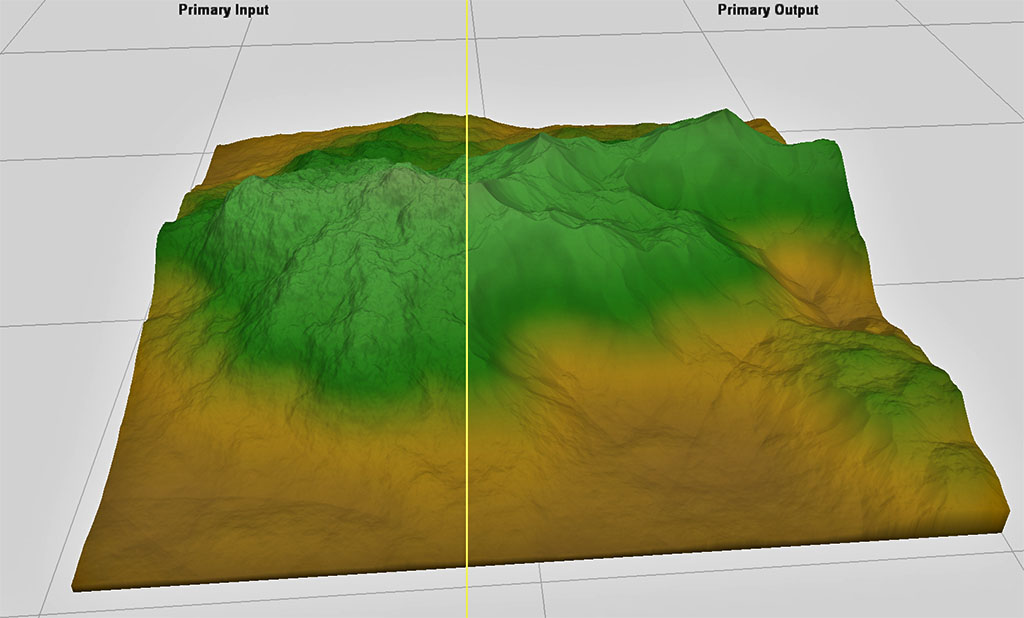 The next blog post will be about using the new modification to the River device.

But this post is about something else. The last post on this blog was about 14 months ago — what happened to 2016?

Seemingly a little, actually a  lot, and many lessons learned the hard way.

The Bad, and What I Learned From It

Let’s face facts – I, more than anyone else, am painfully aware that I seem to have disappeared off the grid in 2016. This manifested in two main ways. First, there were no new releases in 2016. Second, I wasn’t active in the forums. To make matters worse, there was no public information as to why. Yeesh. I heard from a lot of folks via support tickets and emails during that time: some were concerned (are you ok?), some confused (does World Machine still exist?), some frustrated (dude, are you ignoring us?).

The short version: I’m OK (thankfully), World Machine absolutely still exists and is what I exclusively work on, and for that last part, I sincerely apologize, but am taking steps so that this sort of absence doesn’t happen again, starting with this blog post.

Everyone knows running a business is challenging, but what I didn’t expect is that it continually becomes challenging in new ways I wasn’t expecting. I started World Machine as a side project because I love mountains, computers, and the act of creation. Then I realized I had made something people could get a lot of use out of, and devoted myself entirely to running this business, quitting my corporate job. Since then, that’s been World Machine – me at my computer and lots of coffee, exploring how to make this software I love ever better. I created the forums with the vision of having a community of people all passionate about creating worlds, that could support and inspire each other, and enjoyed being a part of that same community myself. I looked forward to interacting with any customer that came along, happily answering questions, even if they were just teaching new users the features. It was fun and I could run the whole thing while still having plenty of time for big sprints of development.

But here’s what I never saw coming. All that was easily doable when there were a couple hundred users. But as World Machine continued to grow, the time devoted to handling the administrative and support side grew with it and sorely tested my ability to handle everything as a one-man shop. I’m amazed and grateful at the success World Machine has seen, but its success greatly reduced the time available for each part of the business – development, customer support, forum engagement, and generally keeping users updated (like the website and this blog). And those last two were the first things to drop.

I’ve finally realized this, and am looking to adapt to the new realities of World Machine’s growth. Here’s a breakdown of what I’ve learned and how things are changing.

Let’s go back to that first most obvious disappearance. After a long cadence of multiple releases per year, there were zero releases in 2016. This left anyone who had purchased a license upgrade expecting to receive, well, upgrades, likely quite upset, and understandably so. In an ideal world, I would aim for quarterly releases, but it’s not always that simple. For example, 2016 was a year with substantial time poured into speculative R&D projects, trying to do things that haven’t been done before. Some of that effort has yielded extremely promising early results; however, other efforts consumed month after month of work, ultimately never producing a viable product. To make matters worse, since much of that speculative R&D work was entangled with the changes to the River device, it impeded my ability to get any other features out that were production ready.

What I’ve learned and what’s changing

Now let’s address the second part of my disappearance: no activity on the forums. This was very different than previous years, and made it seem like World Machine had been abandoned. While I was able to (mostly..) keep up with support tickets, emails, and other administrative requests, that plus development just flat out didn’t leave me time to nurture and provide support to the community that I longed to create and be a part of.

Despite my desire to help every customer with questions, it really is too much for one person. So for the first time, I’m looking to bring on some help with the creation of a part-time position: Community Liaison. If you’re already a pro at World Machine and are looking to help people out and bring in some extra income, shoot me an email at stephen@world-machine.com.  My vision would be for this person to help run the forums and a few other points of customer contact, answer questions and brief me on how things are going there, as well as to help keep lines of communication up during long development pushes on my part. Hopefully, this will help keep the community informed and help me more efficiently wade through that data.

The Good, And What I’m Really Excited About

Not all of the R&D efforts were futile. I’ve developed some incredibly promising new functionality, but haven’t ironed out all the issues yet. This is what’s both so exhilarating but also demoralizing with new possibilities – there’s no clear path to follow to make it work the way you envision it.

But regardless of big and exciting new developments, I’m committed to working on the easier, smaller features as well. That way, even as I pursue what sometimes seems like rabbit hole after rabbit hole.. only to find zero rabbits, there are still upgrades to be shared.

To give you a little taste of what I’ve been so excited about that I spent months of 2016 pursuing it, here’s a basic World Machine world transformed by the application of some of the new devices:

So. although 2016 was a rough year for World Machine progress, 2017 will get to enjoy the fruits of that labor. And that’s a great thing.

Glad to have you back, Stephen. We should talk at some point when you’re ready.

The thing that frustrated me the most about World Machine erosion was how it didn’t allow for realistic big scale drainage basins, it only ever works for building stuff on the medium scale.

I’ve scrolled through countless research papers about generation of realistic river/mountain systems, always so envious and sad because they don’t release any usable software.

Any new improvements on new types of erosion? World Creator is way ahead in this area, even GeoControl at this point.

As a note, World Creator is actually just GeoControl revamped–it’s the same product but new style and different brand direction by its creator.

Wait–never mind. I think you were acknowledging that already. My mistake.

Hi, are there any plans on reworking user interface. Especially broken undo or weird behavior when panning node view?

Look at how Corona evolved from a one man shop to a full business, you can look there for inspiration.

Good to hear from you again 🙂

Bought an upgrade on your effort

Welcome back, really glad to hear you’re up and running again.

I can totally relate to what you’re saying, having grown from a one-man-gig to a small shop with 2 employees and having accepted more work than I ever could’ve manage by myself. It can quickly grow over one’s head and the pace can get very unhealthy.
Looking forward to new features. I’d very much like to request an update adding small usability features that were often requested – like better navigation in the preview (free orbit without constraints), UI being less modal etc. – and then focusing on the functionality, new nodes, workflows etc.

All the best, and thanks for getting back to it 😉

It’s nice hearing from you again, Stephen. Glad you’re alive, well, and we’re able to hear back from you. Good luck with further development.