The second in this time-life series of World Machine Dev Branch feature posts.

This pair of devices is intended to make it easier to compose multiple-world scenarios in World Machine, where you might create parts of the world in one TMD and put things together in another. 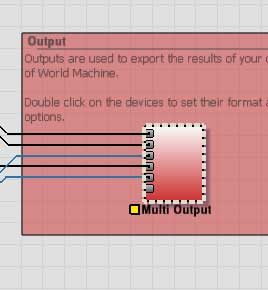 Why would you want to do that?

The name of this feature is still under decision. I’m considering either Multi, Library, or Stage Input|Output. What do you like better?

Much easier than creating seperate outputs for each datatype! Simply set the multi-output for the number of packets you need to capture, give it a filename, and hook all the inputs up. When you build/export the world, it will write all of them to disk in a single file.

When you want to load them into another world (or the same world, later on, perhaps…), you simply add a Library input into the world and point it at the file. It will create the appropriate number of outputs that you can then use in the new world.

More interestingly, packets will retain all of their world data, so they will be automatically placed at the appropriate coordinates in the world. Like the other file input devices, you will be able to choose the sampling method used on the data.

Why is this feature being added?

Mostly because it’s a simple feature addition that yields large dividends. Particularly when combined with the multi-resolution support described previously, and at least one more new feature that will be detailed in another upcoming post. For things like applying textures to the terrain, being able to load in a library file is a major help.

What’s left to do?

This device pair is about 95% done. The basic functionality is up and running. The only major bits left to do are some UI work and thorough testing!

2 replies on “Library Output and Input”

My vote’s leaning towards “Stage Input|Output” as a name, but “Library I/O” is nice, too. Great addition, by the way!

“I’m considering either Multi, Library, or Stage Input|Output. What do you like better?”

Library and Stage Input/Output are more particular names for this devices, which mean only one porpose of the device. I think Multi Output is more suitable in this case.